At Laser Spine and Sport, we have invested in the latest cutting edge 21st Century Technologies so we can help your body heal Quickly, Safely, Naturally.

Call For your Free Consultation

Laser and LED Therapy Actually Accelerates Healing of Injured Tissues, rather than masking the symptoms with medications.
These light therapies stimulate cellular functions to produce vital chemicals necessary for damaged tissues heal on their own, without interference from pharmaceuticals.
PLEASE CLICK ON VIDEO

Our Clinic uses a state-of-the-art pulsed LED light therapy systems. Flexible neoprene pads are placed on the skin over an area of pain, injury, or where support and increased circulation are needed. Therapy pads contain brilliant red, blue and near infrared LED's that penetrate deeply into tissues for rejuvenation. Resulting increases in circulation allow more energy and nutrient rich blood to reach challenged areas and promote wellness and pain reduction. 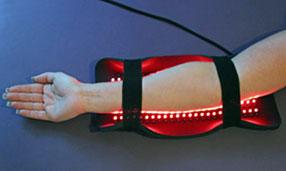 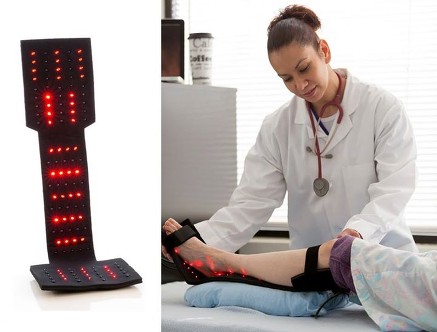 · Back, Neck and Joint Pain

The LED light system is a photo-modulated (pulsed, light emitting diodes) device also known as low-level light therapy (LLLT). The infrared and visible red are the heart of the LED therapy system, providing gentle but powerful non-coherent light. This system uses a carefully timed sequence of settings, known as pulses, to create an environment in which change may occur more rapidly. 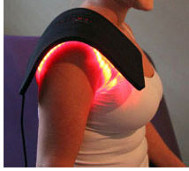 Disclaimer: Statements contained herein have not been evaluated by the FDA. The LED devices are not intended to diagnose, treat, cure or prevent any disease.

organisms, from simple unicellular microorganisms to multi-cellular plants and mammals, and

can have a variety of beneficial therapeutic effects. Indeed, sunlight in heliotherapy dates to

1400 BC and has been practiced for several centuries in many countries, including ancient

Around 1900, light therapies had moved from the use of direct sunlight to the use of filtered

sunlight and artificial light sources, fluorescent tubes and carbon-arc or quartz lamps for

as radiation and chemotherapy. The treatment is quick and painless.”

“The red light penetrates to the inside of the mouth, where it seems to promote wound healing

and prevent further sores in the patient’s mouth.”

injuries treated with the light-emitting diodes.”

Who Has More Recently Studied and Used LED Light Therapy?

It was the space program and NASA that prompted renewed interest in light therapy, using

naturally. The plants grew, and by coincidence [zero] gravity induced symptoms in the

astronauts – loss of bone mass, atrophied muscles and wounds that do not heal – were also

“NASA scientists have found that cells exposed to near-infrared light from LEDs, which is

energy just outside the visible range, grow 150 to 200 percent faster than cells not stimulated

by such light. The light arrays increase energy (ATP and nitric oxide) that speed up the

This technology has been used by physicians, NASA, Navy Seals for muscle regeneration

and healing of wounds. The Navy Seals’ program found the return-to-service rate was 41%

faster with LEDs [LED light therapy]. Additionally, many institutions such as John Hopkins,

Stanford, and the Mayo Clinic have studied and used LEDs for various healing benefits.

What Is So Significant About Nitric Oxide?

Nitric oxide was named “Molecule of the Year” in 1992 by the journal Science, but it took

MD – received the 1998 Nobel Prize for Physiology and Medicine.

surrounding tissue. Nitric oxide is a signaling molecule that is known to relax smooth muscle

cells found in the arteries, veins, capillaries, and lymph vessels. When these muscles relax,

shown to be essential for wound healing, even if chronic or traumatic.

processes. Besides being a strong dilator of the blood vessels (which allows an increased

blood flow), it is known to promote immune system function and wound healing. It is

particularly useful because it is difficult for bacteria to develop resistance against it. Nitric

oxide attacks a range of targets in bacteria, including DNA, cell wall lipids, proteins and

enzymes. In order for bacteria to develop resistance, it would have to change at each of those

attack sites. In its gaseous form, nitric oxide has been used to treat infected wounds.

described above and many others. — Drs. Furchgott, Ignarro, Murad and Burke

What About Promoting Cell Regeneration, and Stimulating Collagen

“The treatment is especially effective at improving the appearance of the face, neck and

chest, by reducing signs of aging, wrinkles and age spots.”

“Six weeks of treatment with LED’s can significantly improve the appearance of fine lines.”